My best friend lived down the block. Her parents came here from Ireland, and besides the television show "Little House on the Prairie" and Nancy Drew books there was no pop culture in their home. They didn't own a single record album or CD. There was a radio station that played Irish music that was on every weekend. My friend even sang an Irish song on the air once. The home was sweet and quiet and the polar opposite of mine.

There was one quirky exception: her mom always picked up a National Enquirer at the supermarket. We would lay on our bellies in her living room pouring over this paper. We knew a lot of it was fake, but it was fun anyway.

One time we read this article about subliminal messages in advertising. It showed a baby doll ad, and described how the word f*%k was embedded in all of the shadows of the doll's dress. (You couldn't see these, you just had to take the National Enquirer's word for it.)

So, two years ago, when I entered the Tomie DePaola contest for a chance to win an all expense paid trip to the SCBWI NY conference, I decided to channel that National Enquirer article. Not in a bizarre sex way. I just thought it would be fun to see if I could manipulate the feeling of the viewer without them realizing it.

The assignment was to reinterpret Little Red Riding Hood. I stuck her in a hangout of my childhood: O'Connor Park in Bayside, Queens. I imagined the creepy squeaky sound of the swings on a day in late fall, and the rustling of the dry leaves in a barren park, with the exception of this wolf on a swing.

I wanted everything in this picture to subliminally tell the viewer she's in trouble. The leaves are shaped like teeth. There is a pitchfork shadow. The wolf has devil's ears, and only the viewer can see his tail. The poll from the swing set blocks her in, even though she doesn't realize it. The wolf leans forward in a friendly, trusting, way, while we scream, "Get out of there!"

Alas, I didn't win. Did my National Enquirer tricks work? Did they work too well, making it too creepy for a children's book? Was it off putting because it was done in good old fashioned pencil? I'll never know.  But here's the final image.  Please check out my website,  http://triciacandemeres.com/
for the part two of this piece, when Little Red walks up to her grandmother's Woodside, Queens house, (actually my Grandma's Woodside, Queens house..:) ) 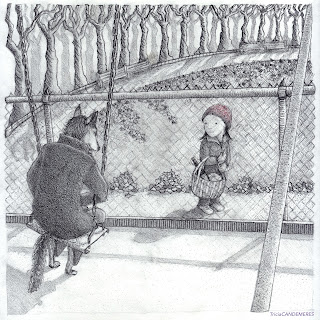