I love the PBS series Finding Your Roots. Dr. Henry Louis Gates Jr., the historian and Harvard University professor, invites a celebrity to sit across from him as he reveals their family history as a page by page scrapbook. The stories are fascinating. Guests sit there thinking they're from one culture and end up finding out they're from something entirely different. And the details he finds!

I meet friends for some sunrise walking and running, and lately they have been telling me their equally incredible immigrant stories. There is not enough time on this planet to learn from the people in my own life, what they experienced and how it formed their place in this world.

I fantasize I will be a guest on Finding Your Roots. Dr. Gates will have me turn the pages of my family tree scrapbook and tell me the details of my grandparents and great grandparents. But I didn't always feel this way.

In 1976, there was a school parade in Queens celebrating the bicentennial. Each grade marched under a different theme. My sister's fourth grade class dressed as pioneers, wearing Little House on the Prairie bonnets and long dresses. My husband's third grade class dressed as Union and Confederate soldiers. One grade built giant Nina, Pinta and Santa Maria boats, pulled by a car.

My second grade was assigned to dress like our country of origin. My mother's family was Irish, but a few generations in. There were plenty of kids in my grammar school whose parents emigrated from Ireland, far more qualified to represent that country than me. My father's parents came here from Greece.  My Aunt Julia had a Greek costume that fit me, but I cringed. I was in a Catholic school, and no one else was really Greek.

My Greek grandparents died before I was born, but there were plenty of aunts, uncles and cousins. They were all nice to me, but it didn't in any way feel like my culture. They spoke Greek at family events and served Greek food. I didn't speak Greek or go near the food. (I watched my Irish mother politely avoid all the food.) My father told me stories of his Greek childhood, taking the bus with his mom and a live chicken purchased from the meat market, or coming home one day to find his pet rabbit missing only to discover it was dinner that night. He talked of how my grandmother raised five children in a Manhattan tenement without ever learning English, or how to read or write in any language. I love these stories now. I can't get enough of them. But in second grade they were too odd.

So, I made some excuse to get out of wearing the Greek costume and dressed like Switzerland. I channeled the pretty Swiss Miss Instant Cocoa girl and wore two braids and a jumper dress and an apron. I colored all that red on a homemade Switzerland flag. It was nice and neutral. Nobody questioned whether I was really Swiss or not.

I look back at that now and know it is all too common. The human need to fit in rather than stand out, only to grow up and realize all the odd parts are the best parts.

So, Dr. Gates, apparently my father had this pet rabbit... 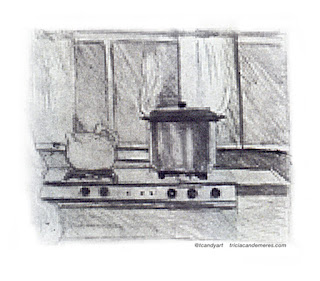 Posted by tricia at 3:54 PM No comments: